Charye is a memorial service for one's ancestors that is performed during Seollal (Lunar New Year's Day), Chuseok (Korean Thanksgiving Day) and other traditional Korean holidays. It is a form of ancestral worship and an expression of gratitude to one's ancestors. 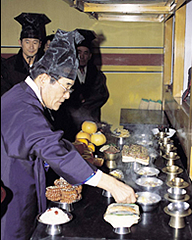 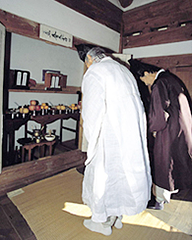 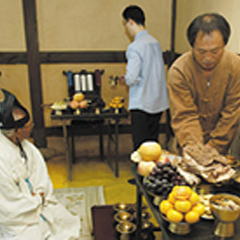 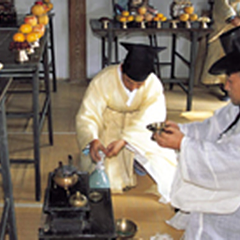 For whom is Charye performed?

Charye is generally performed for the last four generations of one’s ancestors (i.e. as far back as one's great-great-grandfather). Sije (seasonal rite) is held for ancestors going back five or more generations.

If there is a family shrine for one's ancestors, the rite is held at the shrine. If not, it is held in the daecheong (main floored room) or the main room of the house. However, it can be held in different places depending on the structure of the house, region, and family.

What are the preparations for Charye?

In the event of a service for four generations of ancestors, four sets comprising a tablet stand, ritual table, and ritual vessel should be prepared, along with one set comprising a folding screen, incense table, incense burner, incense container, small table, and mat. Although the principle is to prepare four sets of tablet stands and ritual tables for four generations, if this proves difficult then the Charye rite can be held several times in succession, or a large ceremonial table can be divided into sections for each generation to be honored.

What kinds of food are prepared for Charye?

In general, Charye requires that offerings of seasonal special dishes be placed on the ritual table, such as tteokguk (sliced rice cake soup) at Seollal and songpyeon (half-moon rice cakes) at Chuseok. Other dishes are similar to those prepared for Gijesa, the annual memorial service held on the date of an ancestor’s death. 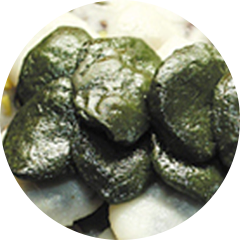 How is the Charye table set?

The basic Charye table is the same as that used for Gije, with the following differences: 1. Skewered (炙) meat, fish, and chicken are served on one plate. 2. Rice and soup can be replaced with tteokguk at Seollal and songpyeon at Chuseok, and tteok (rice cakes) can be replaced with songpyeon.

To perform the Charye rite, the participants need to perform their ablutions and keep mind and body clean for three days before the rite, and on the morning itself, the shrine ceremony room should be purified. Then, under the supervision of the lady of the house, Charye foods including soup, tteok, and pancakes will be prepared, while the men prepare the written invocation, paper tablets, skewers, and ritual vessels, and then prepare the meat and fruits. When it is finally time to hold the ceremony, they prepare the ritual table, the folding screen, and other paraphernalia. For the Charye rite, the cup containing liquor is offered up only once without reading the written invocation, whereas for Gijesa the cup is offered three times, and the written invocation is then read out.

Jinseol refers to the arrangement of the dishes of food prepared for a memorial service, along with the cup, spoon, chopsticks, and other items including fruit and cold dishes. As Charye is a memorial service for the four latest generations of ancestors, who are also worshiped in the Gijesa ritual, a separate ritual table for each generation should be set up. However, in the event of a lack of tables, a large ritual table on which each offering for each generation can be distinguished should be prepared.

Chulju refers to the removal of the ritual tablets from the shrine. If a household has a shrine where Charye is performed, Chulju is not necessary. However, when enshrining paper tablets, the tablets of the four latest generations (parents, grandparents, great-grandparents, and great-great grandparents) should be prepared for the service.

Gangsin means inviting the ancestral spirit to the memorial service. The host goes to the incense table to burn incense, pours the cup of liquor, which main officiant hands to him, on to the mosa (a bowl filled with a bundle of bands and sand) three times, and then makes two bows.

Chamsin is the part of the rite in which the participants make bows to the ancestral tablets. If Charye is held with ancestral tablets, Chamsin is performed before Gangsin; but if it is held with paper tablets, Chamsin is performed after Gangsin. All members of the family who participate in Charye must make bows, i.e. two bows for men and four bows for women, according to the principle of Yin and Yang.

Jinchan is the part of the rite in which the Charye is placed on the table. The food, i.e. the rest of the food that was not prepared during Jinseol, should not be allowed to cool.

Heonjak, meaning a libation for a memorial service, is the part of the rite in which the host offers a cup to the ancestral tablets. Each ancestral tablet of the four latest generations of the family should be offered a cup separately.

Gyebansapsi, also called Sapsijeongjeo, is the procedure of opening the lid of a rice bowl, inserting a spoon into the bowl, and placing the chopsticks on top of the skewered meat or rice cake and songpyeon at Chuseok.

Hapmun refers to the time when the ancestral spirits can partake of a meal. All of the participants leave the ceremony room, close the door, or conceal the ritual table with a folding screen, and lie face down.

Four to five minutes later, when the eldest son coughs three times, everyone returns to the ceremony room or removes the folding screen and gets up.

Cheolsibokban refers to the putting away of the spoon and chopsticks and the closing of the rice bowl’s lid. During the Chuseok Charye, the chopsticks will be put down.

Sasin is the part of the rite in which the attendants send the invited spirits back to the spirit world. The men make two bows, while the women make four bows.

Napju is the part of the rite in which the ancestral tablets are returned to the shrine’s tabernacle. As for paper tablets, they are placed on top of the incense burner and burnt.

Cheolsang refers to the clearing away of the Charye table and the return of the ritual objects to the shrine.

Eumbok is the part of the rite in which the host and the attendants partake of the sacrificial food and drink while lauding their ancestors'virtue.