Permanent Exhibition 2 (A Year in Korea)

A Year in Korea

A Year in Korea shows the yearly life of Korean people from the 19th to the 20th century. It depicts our patterned life as it follows the passage of time, or the coming and going of the seasons, such as 'Jeongwol, (The First Lunar Month)' 'Spring,' 'Summer,' 'Autumn,' and 'Winter.'
You can encounter lots of pleasant scenes: in Jeongwol, people dressed in seolbim (New Year's clothing) celebrate the new year with bokjori (fortune strainer) hung on each house; in Spring, the sound of plowing announces the beginning of the year's farming while spring blossoms are praised by joyous voices; fans and ramie clothes provide a brief cool break in the sweltering Summer; Autumn comes with the bliss of harvest and abundance of food, leaving us grateful to our ancestors; heated rooms and fellowship of people keep us warm in the coldness of Winter.
The Winter section leads to a hanok (traditional Korean house), where you can explore seasonal views with vibrant scenes of people living in it through an immersive video.
The exhibit is designed to show not only the seasonal customs — livelihood, beliefs, food, clothing and housing in the traditional era, but their change through the 20th century. The look and the meaning of a year's life in Korea have been changed during the period, but the value in them remains. 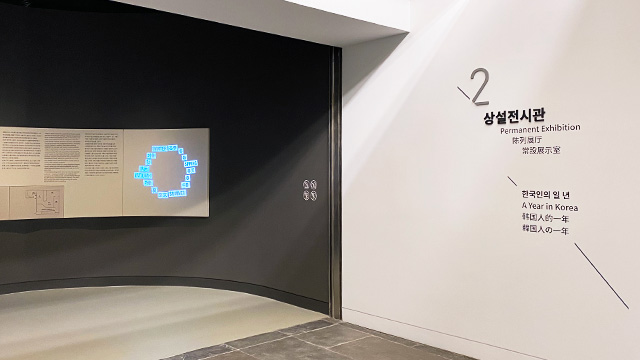 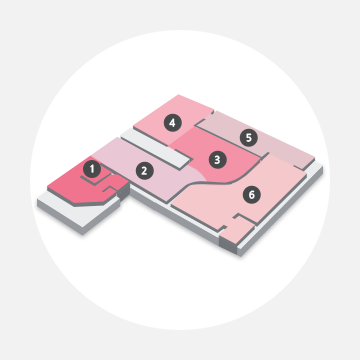 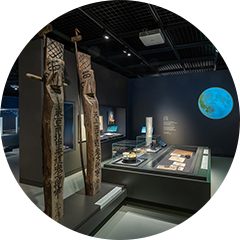 Jeongwol is the first month of the lunar year. As people welcome the new year, various seasonal customs are practiced between Seol (Lunar New Year) and Jeongwol Daeboreum (Great Full Moon Festival) to wish for the year's abundance and peace. On Seol, people celebrate the Lunar New Year by eating tteokguk (rice-cake soup) and greeting one another with sebae (New Year's bow) and deokdam (wishes for good fortune in the new year). In Jeongcho (the first days of the lunar year, including Seol), each family wishes for good fortune by hanging a bokjori (fortune strainer) and tries to predict their fortune for the entire year by reading Tojeong Bigyeol (The Secret Divinatory Art of Tojeong). Some of these customs are still practiced today.
On Jeongwol Daeboreum, each village holds a dongje (rites for village tutelary) to wish for the year's abundance and peace while village people play juldarigi (tug-of-war) and make their wishes on the first full moon of the year. They also play yut nori (a traditional board game with four sticks), which is still enjoyed widely in the villages as well as at home. 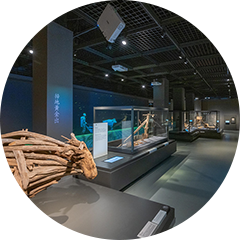 Spring is the season when the ground frozen in winter starts to melt and everything sprouts. It is also the starting point of farming and fishing of the year. Ipchun (Beginning of Spring, around the 4th of Februray), literally meaning 'Spring enters,' still belongs to winter. So in rural villages people start to plow the field preparing for full scale farming of the year after Ipchun when it begins to warm. In fishing villages, people start to fish after performing gut (shamanic rites) on Yeongdeungnal (Wind God's Day) which is also considered the beginning of spring.
Around Samjinnal (Double Three Day), when the spring breeze blows and blossoms bloom, groups of people enjoy flower viewing and dapcheong (outdoor feast in spring), gathering spring namul (wild vegetables) from fields and mountains. Spring also has Hansik (Cold Food Day), when jesa (ancestral memorial rite) is performed at the gravesite and graves are trimmed, to show gratitude to ancestors. 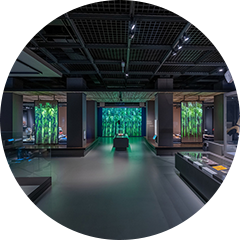 Summer is the season with lots of sunlight and rain, when crops reach their full vitality. It means the busiest season for farmers though they do take occasional breaks from heat wave and a rainy spell. The most important farm work in summer is rice planting and weeding. Each village organizes dure (farmers' cooperative group) to finish the work.
In yeomjeon (salt field) salt is produced in full scale and in coastal areas haenyeo (female divers) vigorously collect seaweed, abalone and sea urchins from the sea. Dano (Festival of the Fifth of the Fifth Month) is the day when people prepare for summer by exchanging dano fans. The term danojang (Dano decoration) refers to the way people decorate themselves on this day, including washing hair in changpo (Korean iris) water and dressing up in cool ramie jacket and skirt. They also enjoy swinging and playing ssireum (traditional wrestling), and many places such as Gangneung hold festivals called Danoje. On Yudu (Water Festival of the Sixth Lunar Month), people used to go to the rivers or the streams to cool off. This custom is still practiced today when we plan summer vacations to escape the heat. 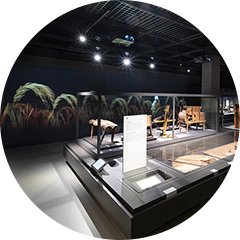 Autumn is a plentiful season when you harvest the crops sown in spring and summer. Farmers are busy wrapping up the year's farming while cutting, threshing and storing rice.
In the middle of autumn lies Chuseok (Harvest Festival), one of the two biggest holidays in Korea along with Seol. It originated from Gabe, a weaving competition in Silla dynasty. On this day, liquor and rice cake made from newly harvested grains are offered in charye (ancestral rites held on holidays) to show gratitude to ancestors. Since the urbanization and rural exodus, a mass migration of those heading for their hometowns is observed during this holiday. They visit their families and relatives with armfuls of gifts. 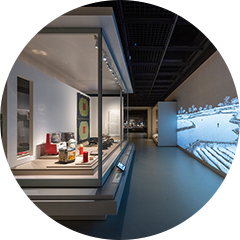 Winter is the season with snow and biting cold. While farmers spend the end of the year doing things to prepare for the new year, such as getting firewood, repairing farming tools and resting, fishermen are busy cultivating oysters or laver and catching skate and pollack. For many families winter is the season for Kimjang (making Kimchi to store and eat during the winter). They also make meju (fermented soybean brick) for soybean paste and soy sauce, and try their best to keep warm.
In Sangdal (the 10th lunar month), Sangdal gosa (October Rite) is held, where they wish for the peace and good fortune in the family by offering harvested crops to various household gods. Dongji (Winter Solstice) is the day when people exchange next year's calendars. This is called Dongji Chaengnyeok. They also make Dongji patjuk (red been porridge) to eat or sprinkle on the gates and exterior walls to keep away evil spirits. In recent years, Dongji is also the season when Christmas carols and Salvation Army's bells start to ring on every street to send the end-of-the-year message and people get busy sharing year-end greetings with one another. 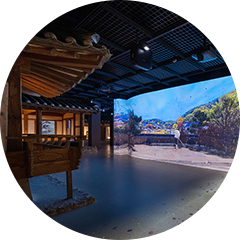 Feel the beautiful scenery of spring, summer, autumn and winter of a hanok, in its sarangchae, anchae, yard and jangdokdae. Experience everyday life in these special spaces.